Since the launch of Tom Clancy’s Ghost Recon Breakpoint, [Ubisoft] been listening to you. [Ubisoft] have been carefully reading the conversations online, and have met some of [their] community members in person to discuss the game.

[Ubisoft] can’t stress enough how much [Ubisoft] appreciate you taking the time to share your thoughts about the game. And while these first weeks have been rougher than expected, [Ubisoft] are taking your feedback to heart. [They] deeply care about this game, the Ghost Recon franchise and you, our community of players, and are committed to improving it.

Thanks to all the player feedback [Ubisoft] gathered on the game and to our constant communication with our Delta Company community leaders, [Ubisoft is] ready to communicate on where [they] currently stand, but more importantly, where [Ubisoft] want to go. 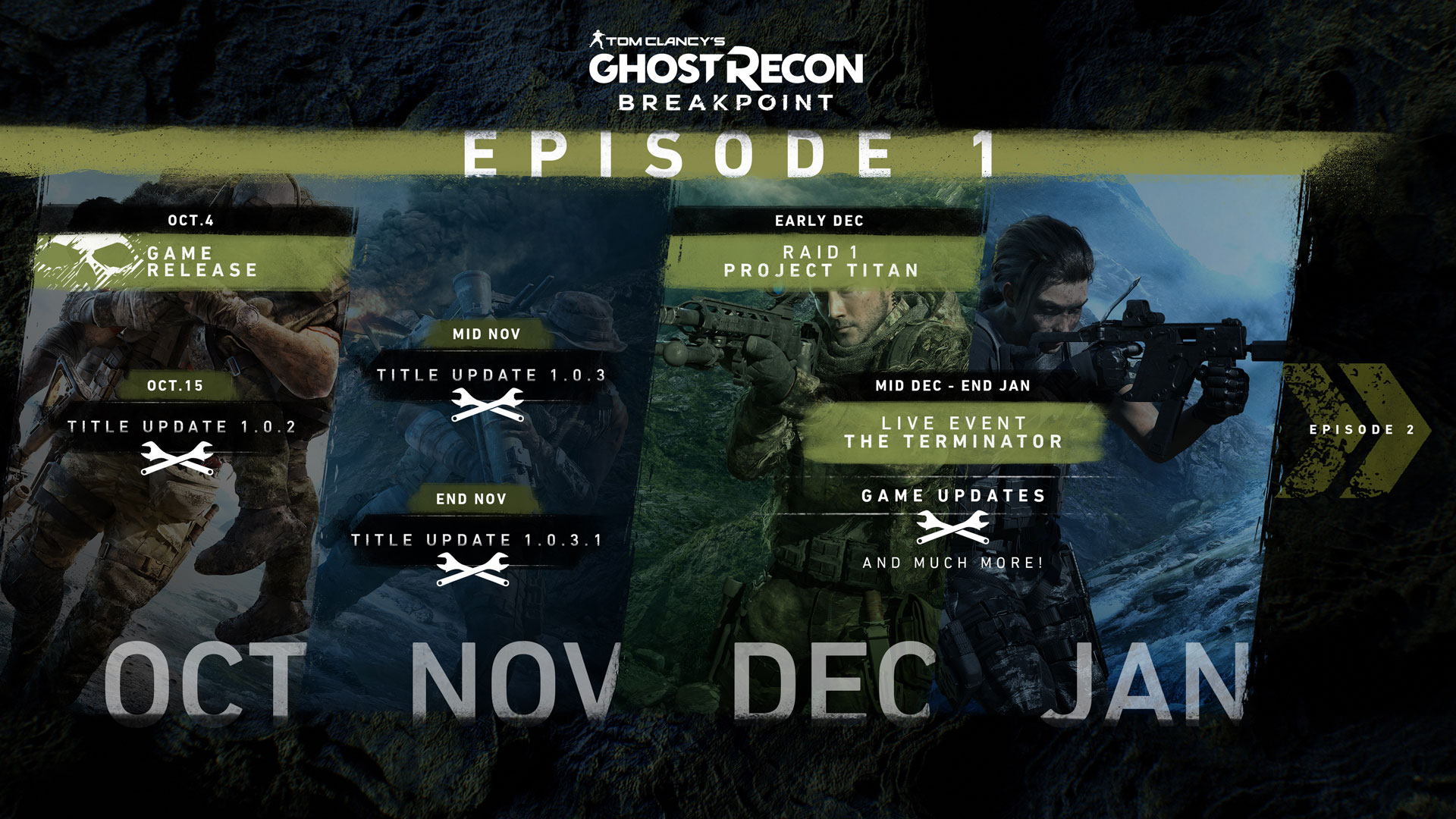 1. Technical State of the Game

Our first priority is to improve the technical state of the game. [Ubisoft] know many players had a difficult time with game bugs and unexpected stability issues at launch and [they] are making every effort possible to address these issues as soon as [they] can.

With Title Update 1.0.2, released on October 15, our team made numerous improvements to the game, focusing on the most pressing issues that could be addressed in this timeframe. [Ubisoft] are working on further improvements that will be coming soon with TU1.0.3 in mid-November, including fixes on the Drone deployment, on changing the fire rate, on NVGs blocking crosshairs and on the Mission Completion notification pop-up.

Title Update 1.0.3.1, coming around end-November, will include further improvements and updates on the most pressing community feedback.

Alongside this post is an update on the Known Issues of the game, and the highest priority issues.

As [they] focus on improving the game, [Ubisoft] also want you to know that our commitment does not stop here. [Ubisoft] are dedicated to supporting Ghost Recon Breakpoint in the long term with plenty of post-launch content and special events to keep the world constantly growing and evolving.

You will get your first taste with Project Titan, our first ever Raid, which will release in December, and The Terminator Live Event, which will release shortly after that. In order to make sure [they] remain agile and flexible, we’ll come back to you with more details including specific release dates at a later stage.

[Ubisoft] also heard the criticism regarding the in-game economy. That is why [they] are currently working to make adjustments according to players’ feedback in the next few weeks, making the experience for players more comfortable.

[Ubisoft] announced at E3 2019 that AI Teammates would come back to Ghost Recon Breakpoint, and they will. Ghost Recon Breakpoint was designed from the ground up to be enjoyed in co-op up to four players, and as an innovative pure solo experience. As such, adding back AI Teammates to the game is a major undertaking that will still require time. [Ubisoft] will update you as [they] progress towards their release.

Finally, [Ubisoft] are aware that some of the design choices made have caused polarized reactions and discussions regarding the direction taken by the Ghost Recon franchise.

[Ubisoft] are happy to see players embracing the new elements of the game, but [they] also understand that there are areas of improvements. Some of you would like our new survival mechanics to have more impact on your experience, while others dislike the tiered loot progression [Ubisoft] have added.

One of the key elements of our vision for Ghost Recon is to immerse our fans in a gritty and authentic military experience.

In line with this vision and the feedback [Ubisoft] received, [they] are working on a more radical and immersive version of Ghost Recon Breakpoint. [Ubisoft] also want to let you tailor your experience to the way you want to enjoy the game, since freedom of choice has always been part of the Ghost Recon DNA.

It’s still too early to share details on how that will work exactly, but it is top of mind for the team and [Ubisoft] will keep you updated as [they] progress.

[Ubisoft] know that [they] have a lot of work ahead of us to get the game where you want it to be, and that not everything will be addressed or released as fast as all of you might like. Big changes can take time to make sure they are done right, but [Ubisoft] still want to be as transparent as [they] can about the current state of development.

In order to ensure [they] are tackling the right topics at the right time, [Ubisoft] are also looking into releasing a Community Survey that will help you to express yourself about the future content and improvements of the game.

To all of those who have jumped in and to those who are thinking about joining us – please continue to share you feedback. This is only the beginning and [Ubisoft] look forward to the future together.

The official www.ghostrecon.com website will remain the main source for all future updates.