No Year 3 for Ghost Recon Breakpoint! 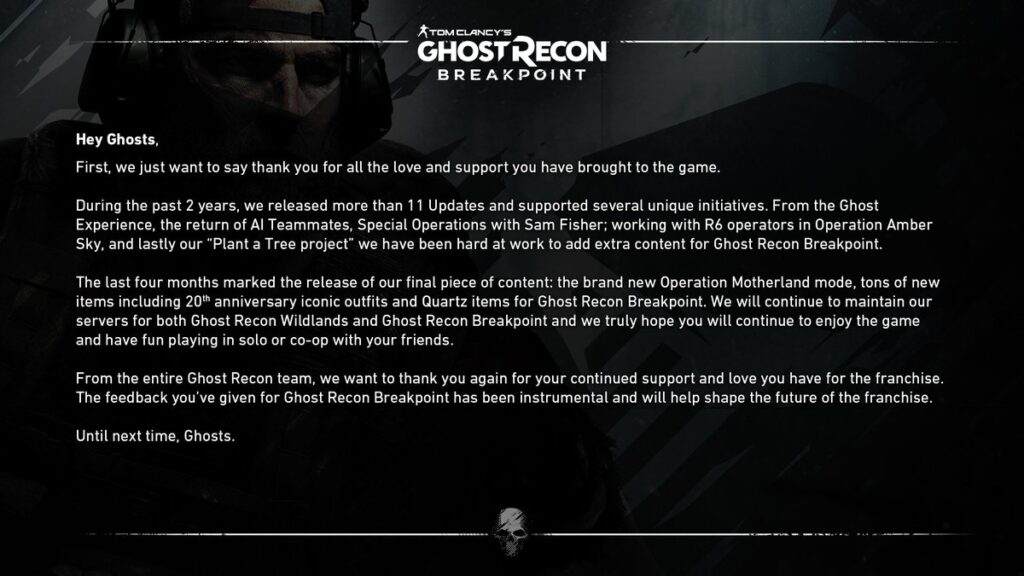 First, we just want to say thank you for all the love and support you have brought to the game.

During the past 2 years, we released more than 11 updates and supported several unique initiatives. From the Ghost Experience, the return of AI Teammates, Special Operations with Sam Fisher; working with R6 operators in Operation Amber Sky, and lastly our “Plant a Tree project” we have been hard at work at add extra content for Ghost Recon Breakpoint.

From the entire Ghost Recon team, we want to thank you again for your continued support and love you have for the franchise. The feedback you’ve given for Ghost Recon Breakpoint has been instrumental and will help shape the future of the franchise.

Until next time, Ghosts.”

With luck, this means a new Ghost Recon will be announced later this year, but, after Ubisoft higher ups pulled their heads out of their butts and are directing by what the community has said what we want (like AI Teammates, not screwing around with Gear sets, a traditional PvP, etc).  Avoid another dumpster fire as GRB brought.   One can hope for a Ghost Recon Future Soldier 2, continuation of Ghost Recon Wildlands story into other countries, or a whole new storyline!   One can hope.