This post will cover both, the ‘Matrix chair’ & Klaus Barbie. 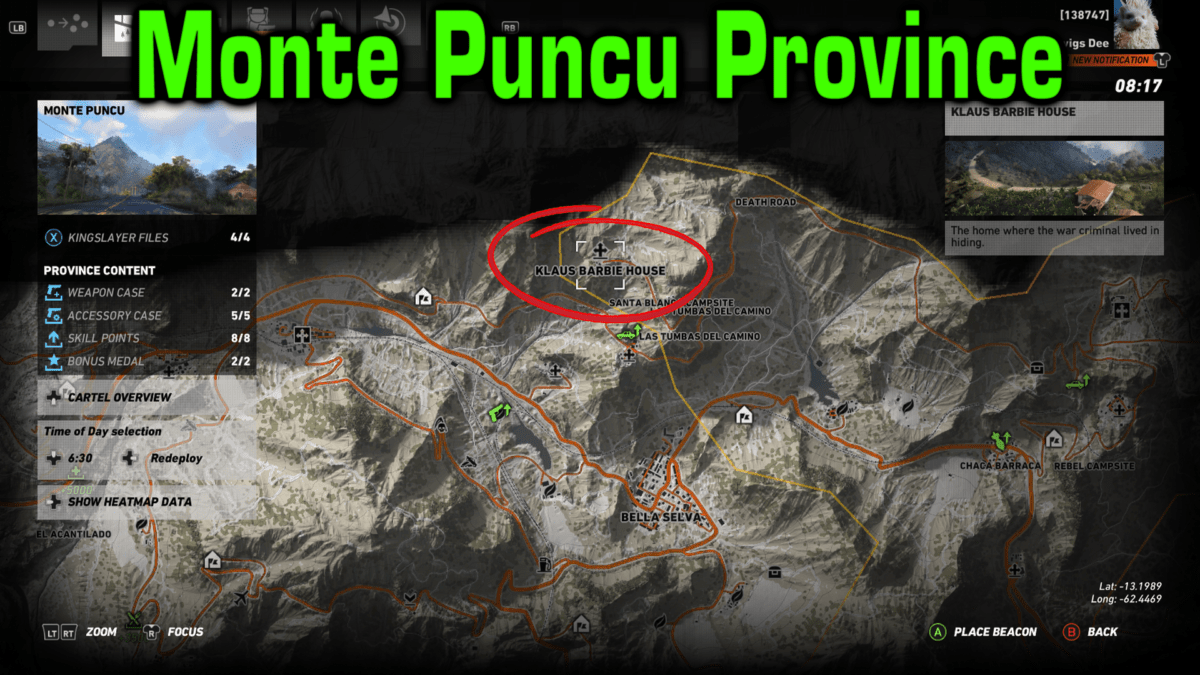 Aerial view of his home.

The easiest way to explain to get into an interesting part of the house, the basement, is to go into the house.  There is a bookshelf with a skull, the skull (which can be destroyed) is hiding a button that will open the door next to it, which will lead you down to the basement.    In the building in the corner with no roof, you can walk into and straight down the stairs to access the basement with no buttons to press.

A secret hideout under the house.

Nothing is gained from this Easter Egg, just a piece of real history added to Ghost Recon Wildlands!   A link at the bottom of the page to more information on the real-world event.

Koani Province, East/North East of the Koani Air Base you will find the chair in the middle of nowhere.

Nothing special, just a developer oops that remained as it caused no harm but created an unplanned “Easter Egg”.  No reward or anything from visiting this chair.

More on Klaus Barbie:  After the war, United States intelligence services employed him for his anti-Marxist efforts and also helped him escape to Bolivia, in South America.

The West German Intelligence Service later recruited him. Barbie is suspected of having had a hand in the Bolivian coup d’état orchestrated by Luis García Meza in 1980. After the fall of the dictatorship, Barbie no longer had the protection of the government in La Paz and in 1983 was extradited to France, where he was convicted of crimes against humanity. He died of cancer in prison on 25 September 1991.

Now for the ‘Matrix’ chair.

Found middle of nowhere in Koani, this chair wasn’t left in place on purpose.   Apparently, during development, one of the devs was checking out how the chair looked within the game, Koani was available to test on and just forgot to delete the chair after, allowing the chair to remain at the time of release.   The chair hasn’t been removed in any of the patches, that funny oops has been left.